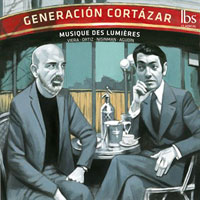 Description: This stimulating collaboration between these composers and the conductor continues their concept of Nuevo Tango Nuevo - a further extension of the cross-cultural and genre-crossing potential of the Argentine Tango, first exemplified by its most famous exponent, Piazzolla. In the broadest sense, “If you like Piazzolla, you'll like this", although these very different pieces have only some points of contact with Piazzolla's dramatic jazz-infused concert tangos. All three are inspired by writings by Argentine writer Julio Cortázar (1914-1984). Rocamadour by Ortiz has a rhythmic obstinacy that lies somewhere between minimalism and candombe drumming, and the piece has an edgy, dark quality. The text on which it is based describes bohemian life in 1960s Paris, from a very Latin viewpoint - Cortázar's. With its hypnotic rhythms, virtuosic marimba part and passionate sensibility, it exudes a sense of the exotic, the sensual, somewhat dangerous but thrilling. Nisinman's Tercera Generación transports the bandoneón - originally of German-Jewish origins - back from Argentina to Europe, inspired by passionately rhapsodic anti-fascist poetry by Cortázar. The work is essentially a five-movement bandoneón concerto, which contains actual tango music, but interwoven with unmistakable references to a dark, accusatory, European late-Romanticism and sardonic mid-20th-century post-romanticism (and look out for the B-A-C-H motif), and culminating in a trenchant ostinato-driven finale. Viera's La noche boca arriba (The Night face up) is a melodrama based on Cortázar's novella in magical realism style in which a man has a motorcycle accident and fades in and out of consciousness in hospital. He dreams of being pursued, captured and prepared for sacrifice in pre-Columbian Mexico. But it is unclear which is reality and which is dream, or whether both are simultaneously real; the blade under which he dies at the end is either the surgeon's scalpel or the sacrificial knife - or both. The narrative is acted in strict co-ordination as part of the music as in an opera, as opposed to "read" by a narrator with musical accompaniment, the effect being of a vividly illustrative series of film scenes. Marcelo Nisinman (bandoneón), Lisandro Abadie (narrrator), Orchestre Musique des Lumières.