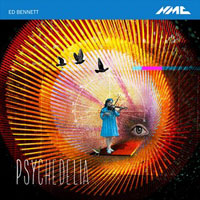 Description: Bennett has an individual and unmistakable style, which largely relies on powerfully rhythmic material with the visceral impact - and unrelenting volume - of a rock concert (though the music has little in common with the actual sound of 'non-classical' genres). Up-front, in-your-face, aggressive, poundingly insistent, and loud; this is the Marmite of contemporary music - you will probably either love it or loathe it, but you are unlikely to be indifferent to it. Having said all of which, there is a great deal of variety to these pieces, even though they share the hard-driven, percussive, confrontational æsthetic described above. Freefalling, inspired by Felix Baumgartner’s 2012 world-record freefall from the edge of space - remember that?- is a succession of jittery, rhythmically pounding cells, consisting of a couple of chords and some fanfares; an unruly cousin of minimalism. Song of the Books is a "wall of sound" for cello, ensemble and electronics, in three movements, using the traditional Irish air, Amhrán na Leabhar, as its basis. A half-hour work structured like a traditional three-movement concerto (that being the only traditional thing about it), it makes a definite impact, like the other works here. Psychedelia builds slowly, from sparse but strident solo lines to swirling, rolling full orchestral textures, as though as the psychedelic takes hold one is transported to an infinite John Luther Adams soundscape of the mind - which seems about right. The trip turns bad, the landscape nightmarish, before resolving into a serene, blissed-out version of reality. Organ Grinder is a concerto for MIDI organ and strident Louis Andriessenesque ensemble, featuring the widest range of timbral and gestural contrasts of the works here, with the battering percussive cells of Freefalling accompanying the organ which thrillingly transforms between fairground organ, the mighty Wurlitzer of the music hall, and cascading roulades of notes and clusters borrowed from the world of the contemporary concert organ.