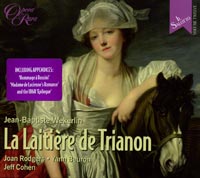 Description: The little, short-lived genre of the operetta de salon had its day during the second half of the 19th century and this 1858 example, premiered at the very first of the famous Saturday night soirées given by Rossini at his Paris house, is a good example: inconsequential, frothy, undemanding of its audience yet charming and skillfully crafted. Includes the original Homage a Rossini written for its host, as well as an alternate ariette from an 1868 published version. French-English libretto. Joan Rodgers (soprano), Yann Beuron (tenor), Jeff Cohen (piano).