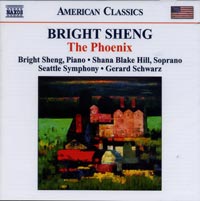 Description: Sheng's assimilation of Chinese and Western musics is by now well-known and his 1999 piano concerto Red Silk Dance is an engaging 15-minute example. The Phoenix (2004) is a setting of the Hans Christian Andersen tale in which Sheng's eclectic tent is opened as widely as possible. The other big piece is the 1988 H'un is a stark, 23-minute evocation of the brutality of the Cultural Revolution and a meditation on the destruction of lives and human potential it caused often using aggressive atonal means. Bright Sheng (piano), Shana Blake Hill (soprano), Seattle Symphony; Gerard Schwarz.