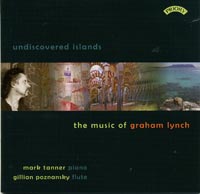 Description: After an early start in non-classical music, Lynch first studied composition formally, then somewhat removed himself both geographically and philosophically from the mainstream of contemporary music. An interest in Mediterranean and North African indigenous musics makes itself felt, especially in the more recent pieces. The composer's finely nuanced harmonic sensibility is shown to great advantage in the two sets of White Book pieces, and subtle flamenco influences are apparent in the Petenera cycle. There is an element of 'new age' world-music meditation about a number of the slower movements especially, particularly noticeable in the atmospheric works with flute, but the rhythmic sophistication and flexibility exceed what is customary for this genre. Three attractive tangos for flute and piano (Lynch has made transcriptions of Piazzolla, and it shows) round out the recital. Mark Tanner (piano, Gillian Poznansky (flute).