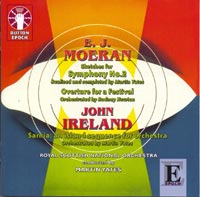 Description: The first mention of a second symphony dates from 1939 and Moeran appears to have worked on it, on and off, from 1942 through the final year of his life even at one point announcing an anticipated premiere for 1947 by Barbirolli and the Hallé Orchestra. But various things intervened - personal stylistic advancement through the Violin Concerto and Cello Concerto which made his original thoughts harder to incorporate with his later style; renewed battles with alcoholism; the longing to be in Ireland where he felt energized and liberated to work; concerns about advancing mental illness. In the end, he apparently settled on a single-movement, four-section work à la Sibelius' Seventh. The first three movements were sketched out and Yates orchestrated them and completed the work in ways you'll have to read about in the notes (for anyone wanting a more involved explication, I have a 19-page PDF by the scholar who wrote one of the notes; just ask and I'll e-mail it to you). What we have is an almost overwhelmingly dynamic, open-hearted, high-spirited work which breathes the raw sunshine and wind of the Irish coast. You'll be swept away by the power of the outer sections, delighted by the sparkling, dancing scherzo and soothed by the third-section Adagietto. Biggest news in English music since the Elgar Third! The Overture is a short, "comedy-overture" type piece orchestrated from a piano sketch dating from the mid 1930s while Yates appropriately applies Ravelian colors to Ireland's Guernesey-inspired piano suite which produces a colorful and very attractive piece which will not displace the piano original but which can stand on its own as an orchestral piece. Royal Scottish National Orchestra; Martin Yates.