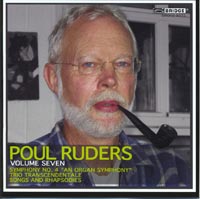 Description: The symphony is as impressive a work as one would expect of a symphony for organ and orchestra by one of Denmark's finest contemporary composers, and its most idiosyncratic. Unsurprisingly, the work is firmly grounded in tonality, though as usual, Ruders takes leave to introduce whatever kind and degree of dissonance he chooses to suit his dramatic needs, and as is often the case, a mood of melancholy or foreboding pervades much of the piece. The organ is used less in a concertante role than as an enormously sonorous and versatile addition to the orchestral palette (much as he has used the accordion to augment chamber combinations) - there is virtuoso keyboard writing aplenty, to be sure, but sometimes this is dovetailed into virtuoso orchestral material so as to leave some doubt as to where the one leaves off and the other starts. The first movement is a brooding prelude, all craggy landscape and lowering storm clouds, and this is followed by a funeral march, initially shocking in its brutality. But then the music unexpectedly develops a certain swing, and suddenly we are closer to a New Orleans funeral, and then the texture lightens into a kind of scherzo. The real scherzo follows, a virtuoso étude or concerto for orchestra (indeed, Bartók's seems deliberately evoked). The massive finale is based on an ostinato, increasingly majestically elaborated for the full forces, leading to a magnificent peroration and a very tonal final statement. The little solo organ piece is a technical tour de force, beginning in Baroque pastiche and developing increasing chromatic tendencies, concluding in a very dissonant idiom indeed. The twelve short movements of Songs and Rhapsodies punctuate a varied sequence of evocative impressions, with very creative use of both consonant and dissonant harmony, with fast motoric rhapsodies, with an energetic post-minimalist feel.