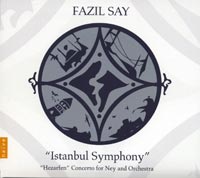 Description: Think of the 42-minute, seven-movement Istanbul Symphony as a soundtrack from a 70mm Super Panavision historical epic film from the 1960s and you'll have a good idea of the impact it makes. The movement titles pretty much tell all: "Nostalgia", "Religious Order" (a rhythmic assault in the manner of Stravinsky of The Rite), "Blue Mosque", "Merrily clad yound ladies aboard the ferry to the Princes' Islands", "About the travellers to Anatolia departing from the Haydar Pasha train station", "Oriental Night" and "Final"; Turkish flute and dulcimer-like kanun along with Turkish percussion and, of course, Turkish musical modes, add to the authenticity from the Turkish side while the large orchestra is handled with the skill of a native European. This is the Dionysian side of Say. The Apollonian side is present in the much more lyrical and quieter concerto for the Turkish flute, whose four movements ("Istanbul 1632", "Galata Tower", "The Flight" and "Algerian Exile") proceed without a break. Hezarfen is the name of a 17th century Turkish aviation pioneer who flew three kilometers from the Galata Tower, over the Bosphorus in, yes, 1632. Algerian exile is what awaited him when the Sultan decided that this made him a dangerous man. A couple of Turkish drums, a waterphone, a UFO drum and an oscar (?) are used in the orchestration of this concerto. An hour-long DVD contains the Symphony concert and documentary and a documentary on the flute concerto. Naïve CD & DVD