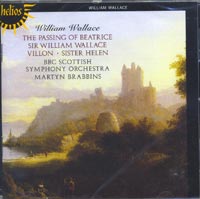 Description: When this was first released in early 1996 it was the first recording of any music by this Scottish polymath (eye surgeon, painter, classical scholar, poet, dramatist, writer and composer) and the first of his symphonic poems was the first British work of that genre (1892). Although Beatrice is very much under the influence of Liszt, by the time Wallace finished his cycle with Villon in 1909, he has attained a style very much his own, vividly portraying various elements in the lives of the larger-than-life characters he has chosen with masterful and rich orchestration. If you didn't get this the first time... BBC Scottish Symphony Orchestra; Martyn Brabbins. Original 1996 Hyperion release.