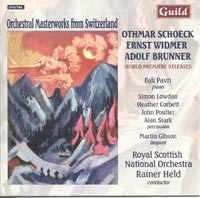 Description: This disc of World Premiere Recordings of Swiss music is bracketed by two pieces by Schoeck which come from both ends of his career: the 1908 overture, a 16-minute overture-tone-poem in conservative late Romantic style, and a 1950 commission for the 600th anniversary of Zurich's joining the Swiss Federation. Since the music opens by representing mountains calling to Zurich, Schoeck supplies elemental music of sound and energy with the timpani as busy as you're likely to find in a hundred other compositions by anyone (except, maybe, Jon Leifs). Widmer moved to Brazil in 1956 and his 31-minute concerto from 1988 is a fascinating blend of Bartókian central European modernism with the African rhythms and colors of the folk culture of his adopted city Salvador da Bahia. Brunner's 18-minute Partita was written under the gathering clouds of war in 1938-39 and fits right in with the dozens of such dark, nervous and intense pieces from that period. Fali Pavri (piano), Royal Scottish National Orchestra; Rainer Held.