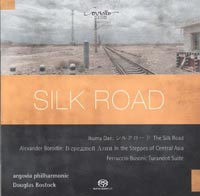 Description: Needless to say, this is here for Japanese composer Dan's 25-minute, four-movement suite which was premiered in Tokyo in 1955. Very conservative in style, it has a lot in common with Western film music. European tonality, Far Eastern pentatonicism and Middle Eastern melismas give it exactly that kind of character and contributed to the post-war reacquaintance in Japan of Western music after decades of condemnation of Western culture. Argovia Philharmonic; Douglas Bostock.