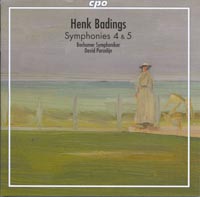 Description: This is not the fastest of continuing cycles (only the third release in 8 years) but it’s proving to be one of the most satisfying. Badings claimed that he owed most in his symphonic style to Bruckner and we finally see that here. Both symphonies show it but especially the Fourth of 1943 which is not in any way a “war symphony”. This 36-minute, four-movement work sounds as if, in some alternate universe, Bruckner and Hindemith got genetically combined: the leanness of orchestration of the latter but the gestural outline of the former. The trio of the scherzo is almost pure Bruckner. The Fifth was commissioned by the Concertgebouw for their 60th anniversary in 1949 and you better be ready for the ripping, almost punk-like onslaught at the beginning of the first movement which, however, does not continue for long. You may think of Honegger at times, the orchestration remains lean and transparent but you-know-who will peek in again from time to time. Vital and bracing stuff. Eight symphonies down and seven to go! Bochum Symphony; David Porcelijn.