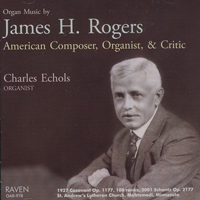 Description: Rogers spent fifty years as an organist and music director at various religious institutions in Cleveland but also is one of the rare early 20th century Americans to have written in the genre of the organ sonata. These three conservative four-movement sonatas date from 1910, 1921 and 1923 and reflect the 19th century habits and practices of his German and French teachers (the latter were Widor and Guilmant). Charles Echols (1927 Casavant organ of St. Andrew’s Lutheran Church, Mahtomedi, MN).