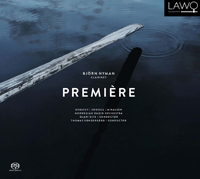 Description: Every now and then along comes a concerto of symphonic scope, which transcends showy virtuosity in pursuit of a larger, coherent narrative - the ultimate example probably being Busoni's piano concerto. Mikalsen's half-hour, three-movement concerto is another such; a full-scale symphonic canvas of drama, depth and originality. The first movement draws the listener in with an amorphous, unfocused opening with the clarinet hesitantly finding its voice, though even here the music has a sure sense of direction. Soon, something remarkable happens; a sudden, glorious resolution into a chord of towering, Romantic splendor, spanning the entire orchestra, and this is now revealed as the music's macro-structural device. It is as though the widely spaced sequence of massive chords that ensues constitutes the work's actual thematic material, and the interstices between them, containing an unimaginable wealth of detail, are vastly distended in time to allow this secondary material to achieve intelligibility. The solo writing presents exceptional technical challenges, more for the unusual, constant agility required than the occasional excursions into vocal multiphonics and other extended techniques, while the orchestration, drawing on the resources of a very large orchestra with an extended percussion battery, is of quite remarkable coloristic depth and texture. The second movement begins with unearthly sounds, produced acoustically but suggesting the expanded palette of electronics. The movement proceeds in the same idiom as the first, with a similar slow, tonal pulse, but whereas the first developed momentum and achieved an inexorable, propulsive climax, that of this movement is mountainous and monumental, giving way to a grotesque dance of mountain trolls that constitutes the work's scherzo. The finale, marked lontano sees the work gradually receding, its climaxes shorter-lived and finally extinguished in a sunset blaze worthy of the Alpensinfonie, after which the piece simply evaporates into crepuscular darkness. Björn Nyman (clarinet), Norwegian Radio Orchestra; Olari Elts, Thomas Søndergård (Mikalsen).