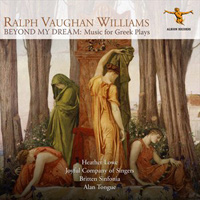 Description: In 1911, Vaughan Williams wrote music for three plays by Euripides, then newly translated into English verse by Gilbert Murray. He wrote music that he considered worthy of the plays, while also satisfying the requirements of Isadora Duncan (for dancing) and Murray (who was anxious that the music should not overwhelm the poetry). Whether experimental or not, Murray finally concluded that he liked it very much. There was a single public performance, of which we know very little, but none of the music was ever performed with the plays for which it had been written. All eight tracks are for mezzo-soprano, female chorus and orchestra. Texts included. Heather Lowe (mezzo), The Joyful Company of Singers, Britten Sinfonia; Alan Tongue.