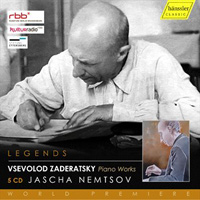 Description: We’ve had this recording of the Preludes before (09M064) and Melodiya enlisted a pack of six young pianists to cover the Preludes and Fugues (04S011), leaving half of these five CDs with likely first recordings. This most-persecuted of all Soviet composers had his entire œuvre destroyed by the authorities during his 1926 arrest so he began again upon his release two years later with two single-movement sonatas, somber, morbid and harmonically harsh but in the same vein as the constructivist and expressionist composers like Mosolov. In 1929-30 came three short suites of small program pieces (Album, Cups and Microbes) not miles apart from Prokofiev. The F minor sonata came after another release from prison in 1939 and has a hypnotic intensity and jet-black mood best not encountered with rope or sharp objects nearby. The two lengthy suites Homeland and The Front come from 1946 and 1944 respectively, the former with two “machine music” pieces (Railway and Factory) and Shostakovich-like sarcasm in Gang of Enthusiasts and Young Generation among its seven numbers while the ten of the latter (with examples like Burned-out Ruins of the Home Town, Attack, Over the Mass Grave and Burning Earth) apparently stem from his experiences as a soldier in the 1919 Russian Civil War. Zaderatsky is now being recognized in Russia as a first-rate composer and this surprisingly inexpensive set helps show why. 5 CDs. Jascha Nemtsov (piano). 24 Preludes were an original 2010 Profil release.