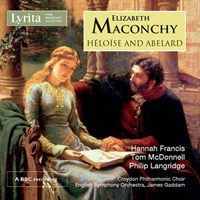 Description: The composer described this work as a 'dramatic cantata', and it certainly is; very little separates it from opera. Maconchy wrote her own libretto, drawing on primary sources only; Peter Abelard's account of the tragedy, the correspondence between the lovers, and several of Abelard's hymns. The themes that dominate the 12th century story - feminine independence, sexual equality and intellectual freedom - must have appealed to Maconchy, an extraordinarily gifted and uncompromising composer who happened to be a woman in the male-dominated musical world of 20th century Britain. Maconchy's idiom was always tonal, but very personal. In this work she handles large orchestral and choral forces with great deftness, and the writing for the three principals is of exemplary quality, eloquence and character. The work establishes its stature and scale from the outset, with a magnificent setting of Abelard’s Easter Hymn, "Veris grate tempere". The work's other big, dramatic moments are also handled with great effectiveness, for example the crowd scene protesting Abelard's punishment by mutilation, in which the chorus is subdivided, with sotto voce mutterings adding depth to the texture. The intimate scenes between the soloists also carry great emotional weight, with the forces used in chamber music textures of painterly detail and depth. Texts included. Hannah Francis (soprano), Tom McDonnell (baritone), Philip Langridge (tenor), Croydon Philharmonic Choir, English Symphony Orchestra; James Gaddam (rec. March 3, 1979).