BRIAN CURRENT (b.1972): The Seven Heavenly Halls for Tenor, Chorus and Orchestra, WLAD MARHULETS (b.1986): Concerto for Klezmer Clarinet and Orchestra, LUKAS FOSS (1922-2009): Song of Songs for Soprano and Orchestra. 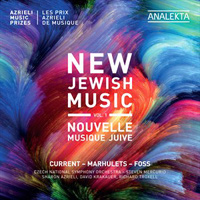 Description: A most enjoyable programme of three very different works, all thoroughly tonal in their respective ways. The Current is based on a passage of the Zohar, a mystical Kabbalistic text, which describes a series of ecstatic states symbolised by seven coloured halls. The piece's opulently scored ten sections form a paean of ecstatic exuberance, almost exhausting in its energetic enthusiasm. The music is appropriately saturated in colour and turbulently energetic. The soloist acts as an irrepressibly exhilarated guide through the Heavenly realms, the narrative musical material based on scales derived from traditional Jewish modes. Current excels at music of propulsive, headlong energy (see also his Airline Icarus - 12Q068), so his idiom and this visionary journey make an ideal match. Marhulets' concerto is an absolute riot. Anybody who isn't grinning broadly and tapping their toes a minute into this thing should probably check that they still have a pulse. The composer describes his first encounter with Klezmer music, as a teenager, thus: "This was music that was so boldly Jewish, so full of wild energy that a kind of madness enveloped my senses as I listened to it... I decided to become a musician on the spot.” The madness has evidently not abated. In keeping with Klezmer's flexibility, Marhulets admits contemporary styles - elements of jazz, a funky electric bass line - into a polystylistic fusion that remains true to the celebratory traditions of the genre. The central movement is a haunting lament with a cadenza full of 'bent' notes and vocal-style inflections; the outer movements are imbued with a delicious, delirious energy. Foss' (still rather under-recorded despite having been championed by Koussevitzky and Bernstein) settings of four sections of The Song of Solomon is an early work, neoclassically elegant and eloquent, with prominent echoes of Bach and neoclassical Stravinsky.Texts and translations available online. Richard Trozell (tenor), David Krakauer (clarinet), Sharon Azrieli (soprano), Czech National Symphony Orchestra and Mixed Choir; Steven Mercurio.