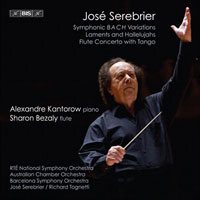 Description: Alongside his illustrious career as expert conductor of an unlikely range of repertoire, Serebrier has composed prolifically since his teenage years. These works, all from this century, show a master craftsman of great expressive and emotional potency at work, in a thoroughly accessible idiom that variously evokes a podium-eye view of Sibelius, Mahler, Tchaikovsky and the 20th century tonal tradition. Symphonic BACH Variations is best succinctly described as an absolute ripsnorter. Effectively a symphonic concerto, its four movements form a symphonic structure with a concertante piano part in the best tradition of Romantic concerti. The most famous of all 4-note motifs is used as the basis of the entire work, generating every conceivable texture, dramatic gesture or type of figuration, from grandiose and exuberant or stabbingly incisive to lyrically sweeping in the exhilarating first movement, or tragic in the work's emotional nadir, the dolorous finale - the work's real slow movement - which appropriately introduces the first seven notes of a motif almost as ubiquitous in the literature as B-A-C-H, bringing the work to an unsettling conclusion. The third movement begins and ends in a mood of lamentation, but unexpectedly gives way to a motoric, aggressive central allegro. The second movement is a scherzo diabolico, maliciously scampering and hyperactive. The earlier Flute Concerto is an attractive piece, beginning with a lively first movement, followed by an extended, improvisatory cadenza, a vigorous, virtuosic scherzo, a lyrical, increasingly dramatic fantasia for the rich-toned alto flute, the tension then continuing into a sultry, if slightly indecisive, tango with lyrical interludes. The finale is a virtuosic showpiece to balance the first movement. Laments and Hallelujahs, as the title implies, follows a darkness-to-light, or tragedy-to-triumph trajectory. It expresses both full-bloodedly, progressing from a sombre, brooding beginning via several stages of lamentation and defiance toward a blazingly ecstatic conclusion (crowned by a spectacular coup de théâtre which we won’t spoil by revealing it here). The work was loosely inspired by the miracle of Lazarus' resurrection from the dead in St John’s Gospel. The three tango-inspired works, paying tribute to the composer’s Uruguayan origins, evoke the spirit of the tango; melancholy, nostalgic and smoldering with passion, but aside from the first they largely avoid the swagger of the dance floor, forming an effective and moving little 'tango suite' - although they weren’t written as such - especially as the last was written for Martin Anderson’s memorial project for his late wife (01U067).