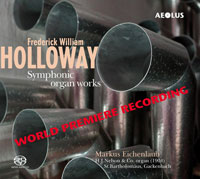 Description: The fact that this British Reger contemporary has largely fallen into oblivion may not least be due to the abrupt end of his activity at London's 'Crystal Palace', where he worked as a resident organist: on November 30, 1936, Holloway's musical sphere of activity was completely destroyed by a fire, the organ and probably also part of his music was destroyed by the flames. The surviving works bear witness to an unmistakable affinity with the French organ aesthetics of the late 19th century. Markus Eichenlaub (organ of St. Bartholomäus, Gackenbach, Germany).