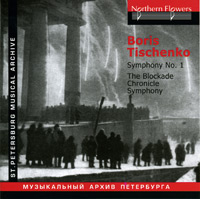 Description: Devotees of this significant Russian symphonist will be delighted to have his earliest work in the genre. Dating from 1961, it's a five-movement piece of some 42 minutes which, unavoidably, channels a lot of Shostakovich but also throws in an unassimilated mixture of avant-garde gestures (especially in the first two movements, including a synthsizer at the very beginning of the first) which may have been marginally acceptable then but which, ten years earlier, would have gotten the composer sent to Turkmenistan to collect folk music. The Blockade Chronicle (1984) derives from incidental music for a play set during the Nazi siege of Leningrad and is a wild ride of savage battle music (three battles, in fact), broken up by bleak mood music depicting freezing, hunger and devastation with a wistfully nostalgic waltz thrown in for pathos; hugely entertaining. Live recordings from 1970 and 1985. Leningrad Philharmonic Orchestra; Edward Serov, Andrei Chistiakov.