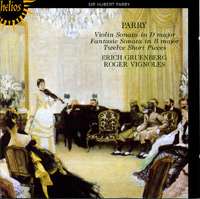 Description: The single-movement 1878 Fantasie Sonata is steeped in the cyclic innovations of Schumann and Liszt while the later sonata, in the traditional three movements from 1889 (when Parry was becoming firmly established on the national scene, Blest Pair of Sirens having come out the year before) is far more traditional in every way. The Short Pieces (1894) are attractive miniatures for less technically accomplished violinists, with a couple of pastiches of Dvorák and some implicit homages to Schumann. Erich Gruenberg (violin), Roger Vignoles (piano). Original 1985 Hyperion release.