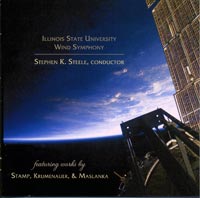 Description: Stamp incorporates motifs from two of Diamond's own symphonies and Ravel's string quartet, Ravel having been a favorite composer for Diamond. The work is tonal, solidly constructed and vigorous, progressing from grief to a celebration of a life well lived, with a wistful interlude in the Romanza slow movement. Krumenauer's work also represents a progression from grief to celebration. Beginning with a simple flowing theme of melancholy character, the first movement builds intense lyrical activity, before subsiding. The second movement is songlike, over a pulse that represents a heartbeat; the finale is a brash, triumphant fanfare. Maslanka's symphony is an appropriate coupling, as it also deals with similar ideas; the second movement pays tribute to the Challenger astronauts. Maslanka's characteristic use of traditional forms - the outer movements are both in sonata form - provide a framework for his typically inventive, extravagant and ebullient style of orchestral timbre, with rich, constantly changing textures. The outer movements are propulsive and energetic, with the usual Maslanka nod in the direction of minimalism; the slow movement quotes a spiritual, highly elaborated to telling effect. Illinois State University Wind Symphony; Stephen K. Steele.