RICHARD BLACKFORD (b.1954): Mirror of Perfection. 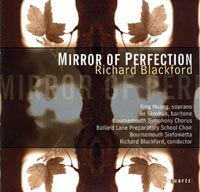 Description: Blackford's setting of seven poems of St Francis of Assisi is a passionate invocation of the life of the complicated yet paradoxically pious and simple saint. Firmly acknowledging the English choral tradition, with distinct echoes of Britten and Vaughan Williams, Blackford's music is resolutely tonal, with the modal inflections that relate it to English church music a consistent part of its vocabulary. The texts cover a wide expressive range, from simple delight and serenity to dramatic expressions of despair and adversity, and this is reflected in the emotional compass of the music. The cumulative waves of Baroque counterpoint in the climactic choruses are overwhelming in their effect, while the monodic contemplations given to the soloists in meditative movements are genuinely affecting. Texts included. Ying Huang (soprano), Bo Skovhus (baritone), Bournemouth Symphony Chorus, Ballard Land Preparatory School Choir, Bournemouth Sinfonietta; Richard Blackford.