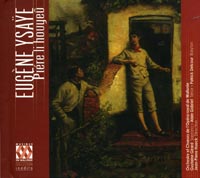 Description: First planned in the early 1880s, this piece of Walloon verismo was not finished until 1930 and was premiered the following year (Ysaÿe was carried to a box on a stretcher to hear it a few weeks before his death). Its subject is a miners' strike, the young miner who decides to plant a bomb and his young wife who is killed trying to defuse it. Ysaÿe uses Walloon folk songs, Wagnerian stylistic devices and direct quotes and a Franckian formal rigor in an 84 minute drama both compelling and delightful (and whose score was only published in 2005 by an American scholar at Case Western University!) 2 CDs. Walloon-English libretto. Guylaine Girard (soprano), Alain Gabriel (tenor), Patrick Delcour (baritone), Orchestre et Chœurs de l'Opéra royal de Wallonie; Jean-Pierre Haeck.