MICHEL LEGRAND (b.1932): Suites for Harp and Orchestra arranged by the composer from the films The Umbrellas of Cherbourg, Summer of '42, The Go-Between (with harpsichord also), Yentl (Grand Orchestre Symphonique; Michel Legrand (harpsichord), Donkey Skin and the musical play Le Passe Muraille. Arrangements for Harp and Orchestra of music from Porgy and Bess (Gershwin), West Side Story (Bernstein) and The Threepenny Opera (Weill). 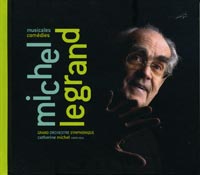 Description: A long interview with the harpist and a short one with the composer are bound into a book with the discs and a dozen or so period and modern photographs of both (and a still from Donkey Skin - go figure....). 2 CDs for the price of 1. Catherine Michel (harp), Brussels Philharmonic Orchestra; Legrand. First disc originally released in 1995.