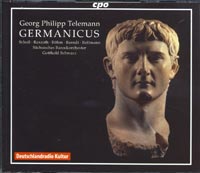 Description: World Premiere Recording of a very early Telemann opera. This was first performed in Leipzig in 1704, just three years after the composer arrived in that city to study law and instead became a composer. He revised the opera in 1710 when he was in Eisenach, set several of the arias in Italian, the practice of linguistically-mixed operas being fairly common by that date. Cases where both arias survive show the increasing depth of Telemann's dramatic response to the text and his flair for colorful and compelling orchestration. None of the recitatives survived; for this reconstruction, performed last year at the bi-annual Magdeburg Telemann Festival Days, a singspiel-format has been adopted with a speaker filling in the narrative missing with the recitatives. Some missing arias (four or five) have been replaced by adapting arias by other composers of the same period (as was commonly done at the time by many composers). 3 CDs for the price of 2. German-English libretto. Olivia Stahn, Elisabeth Scholl (sopranos), Matthias Rexroth (alto), Albrecht Sack (tenor), Henryk Böhm, Tobias Berndt (basses), Sächsisches Barockorchester; Gotthold Schwarz.