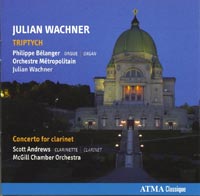 Description: Organ-and-orchestra collectors will want this 2004 work from an American composer/conductor/organist active, among other places, in Montreal at McGill University. This three-movement, 39-minute work was conceived in the French tradition of Dupré, Widor, Tournemire (among others) and, especially, Messiaen. Its movements are titled "Logos" (as in "And the Word became flesh", a 21-minute movement that was designed to be a stand-alone concert work by itself), "Agape" (an adagio representing Godly love and the mystery of transubstantiation) and "Angelus" (a brilliant and flamboyant toccata in French cathedral style). The orchestra is of late Romantic size with a somewhat extended percussion section that includes glockenspiel and tubular bells alongside drums, wood blocks and mallet instruments). Recorded in the huge Oratoire Saint-Joseph, whose basilica is almost 200 yards in length and has a reverberation time of over 5 seconds. The attractive little 12-minute one-movement concerto of 2002, dedicated to Lukas Foss on his 80th birthday and using both classical and jazz idioms, is the Lilliputian coupling.