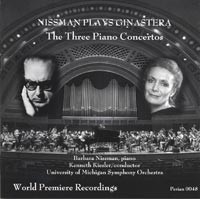 Description: The two most mystifyingly ignored great piano concertos of the 20th century are joined here by the 19-year-old Ginastera's first work for piano and orchestra. This three-movement, 19-minute work will sound familiar because it contains two motifs the composer later used in his ballet Estancia. The combination of rhythmic energy, Latin dance tunes, sentimental romantic melodies and bravura pianism encapsulate the driving, colorful, folk-primitive character of Ginastera's early period. There is only other recording of the Second Concerto (on Naxos from back in 2001) on CD, in the version always performed and recorded, in which pianist Hilde Somer changed the second movement scherzo for left-hand alone to right-hand alone, changing the piano writing significantly and she also added an extended four-measure octave passage at the end of the finale (completely the opposite of what the composer intended). Here the original version is recorded for the first time. Barbara Nissman (piano), University of Michigan Symphony Orchestra; Kenneth Kiesler.