JOHN LUTHER ADAMS (b.1953): The Wind in High Places, Canticles of the Sky, Dream of the Canyon Wren. 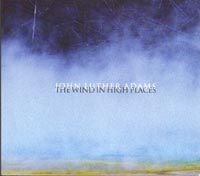 Description: What Become Ocean (10Q010) did for the sea, The Wind in High Places does for air currents. Inspired by the ethereal sounds of aeolian harps, the piece is a study in slowly undulating wave effects, produced entirely using harmonics on open strings, with no stopped notes at all; an unearthly, intangible music. The immensity of the skies and the imperceptible rate of change of the light throughout the day over open, limitless spaces are evoked by the gently fading and overlapping dense polyphony of a large homogeneous string ensemble - all cellos - in the four skyscapes of Canticles. The effect is the musical equivalent of a time-lapse film of the fractal modulations of clouds and progressing weather fronts; stately, inexorable motion of indeterminate scale, vast yet unmeasurable. Canyon Wren has a lonely, weirdly beautiful cry, evoked by the quartet in a series of repeated episodes against a sombre, desolate landscape, timeless and heedless of humankind. JACK Quartet, Northwestern University Cello Ensemble; Hans Jørgen Jensen.