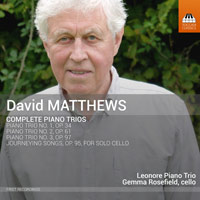 Description: Matthews' trio of Trios, spanning two decades of his creative output, reinforce his position as one of the pre-eminent British composers of chamber music in our time. The works all show the composer's deep commitment to the traditions that followed on from the Viennese classics, and in many ways are among his most 'classical' works, especially the First. This was commissioned by Hans Keller, who, let us not forget, was as thorough an enthusiast for the first Viennese 'school' as he was for the Second and all that followed thereafter. Matthews' First Trio pleased Keller, who apparently saw in it the aspects of classical form and texture of which he approved. The first movement is in sonata form; the scherzo is an affectionate portrait of Keller, the slow movement is songlike and the finale unexpectedly gentle, avoiding a grandiose romantic summing-up. The Second is likewise very classical in structure and material. Here the slow movement is one of the composer's most moving and emotionally deep utterances; written in memory of the novelist Maggie Hemingway, Matthews' ling-time companion, this slow Barcarolle is deeply moving. By contrast, the lively scherzo exploits Matthews' love of vernacular allusions, with much lively syncopation, and the finale provides the sole extended use in these works of Matthews' beloved textures in harmonics, familiar from his quartets. The Third is more unorthodox in form; the first movement is a single line of melody with limited accompaniment, while the second is contrapuntal and chromatic, rich in harmony. The cello solo work consists of three pieces left linked by the idea of travel and landscape, with a recurring feeling of folk influence. Leonore Piano Trio, Gemma Rosefield (cello).