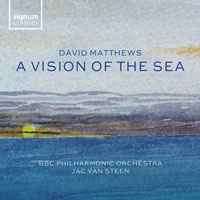 Description: With his exceedingly fine Eighth Symphony, Matthews further reinforces his status as a major British symphonist. While remaining within the tradition, he seldom sounds more than fleetingly like anybody else, and each individual symphony has its own identity and non-programmatic musical narrative arc. After an imposing gateway introducing the work, the first movement of the 8th is a surging allegro, which introduces several extrovert ideas, finally settling on an extended theme which is the subject of a turbulent development. After a huge accumulation of momentum and a thunderous climax, in a dramatic master-stroke the composer reintroduces the main theme quietly and mysteriously, and fully the final third of the movement is a profound meditation. The elegiac slow movement became a memorial to a friend of the composer, who died during its composition. It begins in a mood of deeply sorrowful lament which takes its time to explore its emotional resonances and ramifications, before a slow, sombre, flowing fugue for strings takes over the argument. This quickly accumulates tension and leads to an unexpectedly massive and vehement climax before subsiding into a sad, withdrawn coda. By complete contrast the finale is lighthearted, extroverted and breezy, its material derived from four lively dance sections. A rapt central section was inspired by cloud formations over the English coast, and the movement ends in high spirits. Despite its comparative brevity, the relatively early Sinfonia of 1995 is by no means a poor relation of the full-scale symphonies. It begins with an extended introduction prominently featuring various solo instruments (the violin's contribution may put you in mind of Sibelius' concerto). A vigorous and powerful allegro ensues, with a very prominent timpani part which seems deliberately to hail its cousins, Nielsen's 4th and Stravinsky's Symphony in Three Movements; an energetic development, recapitulation and coda bring this taut little sonata movement to an emphatic close. A Vision of the Sea could very well be subtitled "Symphonic Sketches" with accent on "symphonic", and it is very much Matthews' answer to La mer, except that it sounds very little like Debussy aside from the obvious homage to Jeu de vagues in the scherzo-like second movement, which whips up some imposing breakers crowned with sea-foam. If anything, the first movement recalls the Vaughan Williams of the Antartica, though the sweeping seagulls are pure Matthews. The deep, surging chaconne that forms the work's slow movement takes us from the surface into the powerful currents of the depths, irresistible and inexorable in their fluid momentum. The final section evokes a calm pre-dawn seascape, with the cries of gulls over the waters. The work ends with an evocation of sunrise, booming mightily in the depths and exploding into blinding incandescence. This relates the work to Toward Sunrise, completed the previous year. This is an extended nocturne, with bird cries, beginning at dusk and developing in the form of slow variations toward a tremendous depiction of the eruptive appearance of the sun.