MARK JOHN MCENCROE (b.1947): Fanfare Suite, Celebration of the Natural World, The Passing. 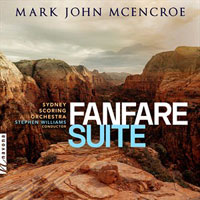 Description: The medium of the symphonic wind orchestra finds McEncroe in his element, its full, bold, rich textures perfectly complementing his gift for memorable melody and warm, tonal harmonies. The composer has previously told us that his titles are intended to give a general impression, without programmatic detail, and the positive virtues - optimism, honesty, joy, among others - named in the movements of the grand, sweeping Fanfare Suite are certainly expressed in the music. McEncroe says that he thinks of the work in terms of "Aaron Copland and wide open spaces, big horizons, the Grand Canyon, John Ford/John Wayne movies ...", and the "Big Sky Music" genre of film scoring epitomized by Max Steiner, Jerome Moross, Elmer Bernstein et al. is never far away, to which (especially in view of the composer’s Australian nationality) Percy Grainger's stirring "out of doors" treatment of wind bands might be added. All these works exist in versions for full orchestra, arranged by McEncroe's customary collaborator, Mark Saliba, and the two symphonic poems can be heard in this guise on 10U064, concerning which we remarked on the composer’s treatment of his superb melodies, repeated over and over and " ... explored extensively in a variety of orchestral guises, whose timbral and dynamic contours and variations in accompaniment suggest a dramatic arc with little in the way of actual development ... somewhat in the manner of film music". The booklet doesn’t credit the arranger of these skilled and wholly idiomatic wind versions, but especially in The Passing, a sombre ceremonial cortège, the densely draped velvety weight of wind orchestra sonority lends the work additional solemnity and power. Sydney Scoring Orchestra; Stephen Williams.