JEF VAN HOOF (1886-1959): Symphony No. 3 in E Flat, Suite from the Opera May Fire, Divertimento for Trombone and Orchestra, For Soprano and Orchestra: 4 Giza Ritschl Songs, 3 Songs in Folk Manner, A Mood of Spring, Afternoon at Home, Folk Song: I Love You, The Garland Has Been Hung. 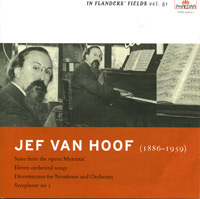 Description: Dating from 1944-45, Van Hoof's symphony has a tragic funeral march for a second movement, as one might expect from a Belgian composer at the time, but the other three are wondrously vernal and optimistic, in the same style you will by now have become accustomed to (Van Hoof's favorite composers were Richard Strauss and Glazunov). The songs, all but one of which are from 1906-13, mostly of lost love and woe, are short but full of a Maherlian/ Straussian Romanticism and exalt the soprano like the latter composer. Flemish/German texts, English summaries.Ann De Renais (soprano), Ivan Meylemans (trombone), Pannon Philharmonic Orchestra Pécs; Zsolt Hamar. (In Flanders' Fields, Vol. 51)