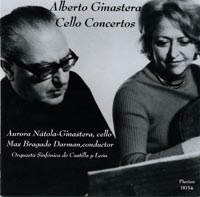 Description: These concertos date from 1968 (rev. 1978) and 1981, the former on the cusp of Ginastera's late style, the latter fully within it. A much wider tonal and harmonic palette is employed here; folk music influences are practically absent but expressivity is often intense, especially in the second concerto which has two nocturnal, haunted movements which are distant kin of Bartók's similar movements. Collectors who know Ginastera only from his Panambí and Estancia period will probably not want to experiment here; contemporary music enthusiasts who tend to have little use for folk music will be gratified. No other CD versions are available. Aurora Nátola-Ginastera (cello), Orquesta Sinfónica de Castilla y León; Max Bragado Darman. Original 1994 Newport Classics release.