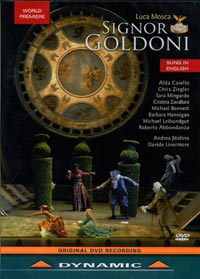 Description: This surreal - in many respects deliberately ridiculous - opera, ostensibly centered on the Venetian playwright Carlo Goldoni, introduces a diverse cast of characters both historical and fictional (including a statue of the archangel Raphael like a pantomime dame) associated with the city of Venice, which emerges as the real subject of the piece. The city, with its strange, colorful history and associations with Carnival and masquerade arguably provides ample material for such a treatment. Mosca's score is a wildly eclectic mixture of non-avant-garde 20th-century styles; vocal ensembles and arias parody Baroque and Classcal operatic styles and the conventions of Italian opera. The music is never less than approachable, and tonal enough to remain easy enough to follow in the context of the action, which is always entertaining. Filmed as a stage production, with occasional cutaways to the orchestra pit, the film captures a good deal of the atmosphere of La Fenice, without the made-for-DVD sophistication of some recent opera films. English subtitles. Roberto Abbondanza (baritone), Barbara Hannigan (soprano), Sara Mingardo (contralto), Chorus and Orchestra of La Fenice, Venice; Andrea Molino. 16:9 widescreen. Dolby Digital 5.1 or PCM Stereo 2.0. NTSC all regions. 114 min.