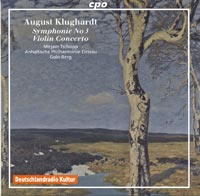 Description: The 38-minute symphony dates from 1879 and is one of those rare members of the genre: bright, cheerful and optimistic almost completely throughout. No sturm und drang here, just the sort of feel-good, yet plainly robustly masculine, music which caused a contemporary to draw comparisons with the suites of Franz Lachner (which does almost nothing for us except make us wish to hear the suites of Franz Lachner - or more than the two in D minor which Marco Polo recorded 21 years ago). Still, one can enjoy this for its strong profile and the positive impression it makes and hope that cpo will record more of Klughardt's five symphonies. The later concerto, just under 40 minutes in length, dates from 1895 and has a certain Beethovenian/Brahmsian sense of scale, occasion and circumstance to it which sets it apart from many Romantic virtuoso concerti (and a funeral-march-like motif which appears late in the first movement, carries through a formally innovative accompanied recitativ and through the final two movements without ever turning the mood of the work much darker). Both these works were wildly popular and praised to the heavens by most critics and, in the case of the symphony, was regularly performed in German-speaking Europe for 20 years. Now we can understand why. Mirjam Tschopp (violin), Anhaltische Philharmonie Dessau; Golo Berg.