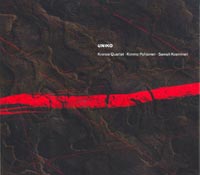 Description: Uniko is the kind of 'crossover' project with which the Kronos have been associated before. The quartet is joined by accordion, voice and no small amount of sampled and electronically transmuted sound. Broadly speaking, much of the quartet material consists of somber, largely tonal, modally inflected material which develops along minimalist lines and is then invaded by a strongly rhythmic beat, assembled electronically. The first piece goes from minimalism to a vigorous middle-eastern-sounding dance with rhythm material provided by distorted sampled sounds, to a kind of slower, new-age minimalism; the second follows a similar pattern; the third introduces guttural electronic beats at the outset, soon joined by the accordion and a melodic suggestion of primitive throat-singing. The fourth begins with distorted electronic noise, out of which a folklike lament emerges in the strings. Then the rhythmic beat starts . . . And so on. The bottom line; the music is completely accessible and would probably work for listeners who wouldn't normally go near a contemporary 'classical' CD or concert, and if you like Nymanesque minimalism and don't mind straying a bit in the direction of certain types of alternative rock, this will likely appeal to you too. Kimmo Pohjonen (accordion, voice), Samuli Kosminen (string and accordion samples, programming), Kronos Quartet.