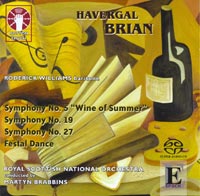 Description: A self-recommending disc for all Brian enthusiasts, with three very different works from distinct stages of the composer's career receiving their commercial recording premieres. The Fifth is a transitional work, with the extravagant early symphonies still very close behind, but with the hallmarks of a new austerity and economy in evidence. The work sets a rather overwrought and immoderately lush poem by Oscar Wilde's former lover, Alfred Douglas, contrasting past sensuous pleasures with present decay and decline and future hopelessness. Brian's music largely avoids the technicolor opulence of metaphor of the poem, opting instead for a craggy, granitic idiom which makes the final crushing climax all the more inevitable. The 27th, curiously, seems to share this general trajectory; composed in the light of hopeful and tragic events surrounding the premiere of Brian's Seventh Symphony, it is hard not to find a narrative of the elderly composer looking back on early, neglected accomplishments and feeling the passage of time weighing heavily on him, in the work's generally elegiac dramaturgy. The classically proportioned 19th is a more straightforward and optimistic work, in which boisterous outer movements bracket a march-like slow movement, in one of the composer's most immediately appealing later symphonies. Texts included. Roderick Williams (baritone), Royal Scottish National Orchestra;  Martyn Brabbins.