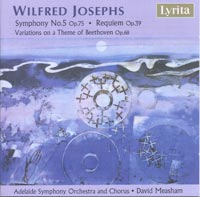 Description: Josephs was a prolific and extremely versatile composer of real quality, another victim of changing fashions in British music. His fifth Symphony (of twelve) followed the relatively grim anti-war statement of the 4th (from a composer whose social conscience often surfaced in his works), and although titled 'Pastoral' it is a weighty and serious work, with drama and pervasive melancholy never far from the surface. The opening movement presents much of the work's material in a generally solemn mood, disturbed by two powerful climaxes; in the very large orchestra is used throughout to great and original effect. A massive, galumphing scherzo follows; humorous and energetic but not 'pretty' - like Bruckner's 'hunting' scherzi. The composer introduces 'Sumer is icumen in' and has great fun with various presentations of it thereafter. The eloquent slow movement is 'pastoral', but there are clouds over this serene landscape. Here and in the fifth movement there are distinct echoes of Mahler, and some lovely melodic and harmonic writing. The fourth movement starts with an extraordinary passage of whirring, clicking insect mechanisms; the whole movement is an unsettled nocturne, which gives way to the real finale, an exultantly brassy sunburst followed by the work's first real sense of repose and tranquility. Variations is a good-humored, witty tribute to Beethoven on his 200th anniversary. Beethoven used the theme twice, in different instrumentation and different keys, and Josephs exploits this with ingenuity and humor in nine variations of striking character, with nods to other composers along the way and considerable drama and intensity; this is no lightweight trifle. The Requiem, a work of great emotional power, began as the composer's string quintet in memory of Eichmann's victims; the original work is incorporated into the final huge canvas as three harrowingly personal, potent interludes in their original scoring, rather more acerbic and dissonant than the more 'public' large-scale sections of the piece. The rest of the work sets texts from the Hebrew prayer of mourning, Kaddish, with its emphasis on praise and consolation rather than death itself, with sumptuous choral textures and full orchestration. Much of the music is slow, introspective and elegiac (though varied and full of character and eloquence), with occasional passionate outbursts, the exception being the second section, which, with its pounding ostinati and massive brass fanfares, is hard not to hear as a protesting suggestion of the Dies irae from the Roman liturgy. The contrasts between the hushed, prayerful mood of the work and its sudden bursts of outrage (in the music, not the text) at man's inhumanity, and between the personal and universal expression of commemoration, make this a dramatically effective work of moving, eloquent intensity. 2 CDs. Robert Dawe (bass-baritone), Adelaide Chorus, Adelaide String Quartet w/Pamela de Almeida (second cello), Adelaide Symphony Orchestra;  David Measham.