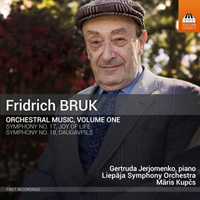 Description: The centerpiece of Bruk's extensive output is his cycle of symphonies, of which these (2016 and 2017) are the most recent. His vocabulary is decidedly tonal and richly neo-romantic, often with programmatic associations, either explicit or concealed, and it is constantly inflected by the folk music of his ancestral Baltic homeland, of Finland, where he has been domiciled since the 1970s, and especially that of his Jewish heritage. The three-movement 17th Symphony started life as a planned piano concerto, and emerged as a 'symphony-concerto' with a concertante piano part often recalling the Romantic concerto style. The work has significant autobiographical content, charting a kind of Romantic darkness-to-light trajectory. The first movement, which the composer calls 'Attempts' in what seems to be his typically idiosyncratic use of English, might better be rendered 'Struggle' based on the character of the music. Bruk's preferred form seems to be variations, whether explicitly labeled as such or not, and the movement progresses through a series of dramatic episodes. The slow movement, 'Sorrow' and the finale 'Strength' complete the symphony's dramatic arc. Bruk's orchestration has a highly developed and individual sense of color, and this is even more the case in the 18th, which concerns itself with the question of exile and persecution of Jews in Latvia, and especially of the composer's family. The first movement is based on a folk tune of regional Jewish origin, and this sense of local color is enhanced by the use of an actual folk instrument - a kind of zither - within the orchestra. The music is tense and dramatic and a real symphonic first movement despite its folk origins. The second movement extends the drama, with a deepening sense of tragedy, with brutal interjections programmatically suggesting the displacement of the population by the Russian army. The finale is a set of variations on a mournful original theme, which traces a narrative arc of its own, reaching a powerful climax at the end after the reappearance of the folk instrument, underlining the resilience of the exiles. Liepāja Symphony Orchestra; Māris Kupčs.