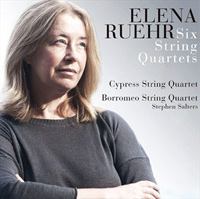 Description: Ruehr draws on a huge range of influences and styles from all periods of music history, and all over the world, to synthesise an attractive, entirely approachable idiom which finds eloquent expression in the quartet genre, which she treats conventionally (from a technical standpoint), with respectful acknowledgement of its history and unique expressive capabilities. Her style has evolved over the course of these six works,and each has its own very specific identity and programme. However, there are common characteristics; short cells are repeated as rhythm elements, or quasi-minimalistically, or as accompaniments to long, lyrical melodic lines; structures may be organized dodecaphonically, but harmonies are invariably closer to those of neo-romanticism and minimalism in their chromatic or modally inflected tonality, with few harsh dissonances, and folk musics, whether in the form of drones, melismatic vocal lines or modality is a consistently recurring presence. Thus the First borrows from Pérotin, Bartókian folk dances and folk melody; the Second sets an actual vocal line, singing of a Scottish legend of the sea in Scots-folk inspired cadences over a pulsing, wave-like accompaniment; in the Third, we hear echoes of Hildegard von Bingen and African tribal rhythms; No.4 is an overt hommage to classical models though with modern harmonies like those of Rochberg's tonal later works, and lively folk dances of Balkan or further eastern flavor. No.5 follows the outline of Ann Patchett’s 2001 novel 'Bel Canto' and incorporates quotations from opera, which is important in the book, while alluding to the story's South American setting. And finally, the Sixth, classically proportioned like the Fourth but more abstract, less programmatic (though it does have a restless, grieving In memoriam subtext), and in some ways the most cogent and satisfying, and least indebted of all her quartets so far. 2 CDs. Cypress String Quartet, Borromeo String Quartet (No. 2).