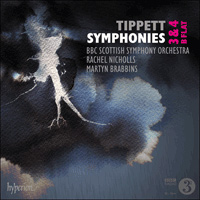 Description: Tippett's Symphony of 1933 - his 'symphony No.0' if you will - is a major find, and a major symphony. It is entirely fair to suggest that had Tippett gone on writing symphonies like this he would still be regarded as a great British symphonist in the company of Bax, Moeran and Rubbra. As it was, he broke with that tradition in forging his own highly personal and ground-breaking idiom, and the rest is history. But this full-blooded neo-romantic symphony, cast in the sumptuous tonal harmony and opulent orchestration of its time and place, is powerful and compelling in its own right, and amply deserving of attention. At one point the composer considered it his first mature work, and called it Op.1, but it appears that he developed doubts about it, and it was withdrawn by 1948. The excellent notes by Tippett biographer Oliver Soden insightfully suggest that at a time when Tippett was concerned to be seen as a modernist " ... a time when Sibelius had fallen deeply out of fashion ..." and was turning away from radical political views, which had produced specimens of agit-prop in his early output (of which there is not a trace in this symphony), the work " ... may have got caught up in this wiping-clean of troubled slates." That the symphony is influenced by Sibelius is unquestionable (and there are traces of Vaughan Williams and even Brahms and Tchaikovsky), but only in the finale do the references sometimes come a little close for comfort; elsewhere a gesture may fleetingly 'sound like', but as an homage or momentary jumping-off point, and to use the term 'derivative' would be churlish. After a slow, brooding introduction the first movement, in skillfully applied sonata form, pits a stormy, martial first subject against an initially more relaxed second that reveals unexpected muscularity in the conflict of the development section. The second subject reasserts itself at the start of the recapitulation, but the jagged first subject reappears, hostilities apparently continuing as the battlefield recedes into the mists and the movement ends. The slow movement is a skein of beautiful, sinuous melodies, full of melting lyricism and harmonic warmth. The finale, in rondo form, has a stately magnificence. If the indebtedness to Sibelius (and in the central episode, to Wagner) is unmistakable, so is the Romantic grandeur, which Tippett never attempted again as he turned toward the ground-breaking vocabulary of his maturity. In Soden's words, this ambitious early work has "... the capacity to respond to a darkling world by leading its listener through shadowy terrain and into the realm of exultation." 2 CDs. BBC Scottish Symphony Orchestra; Martyn Brabbins.