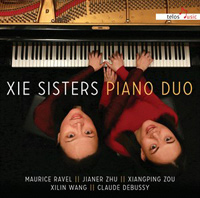 Description: If the presence of the standard repertoire concerns you, you may wish to know that the two substantial suites and the stand-alone piece by the Chinese composers make up well over half this well-filled disc. These composers take inspiration from Chinese myth, tradition, and history more than in traditional music; there is more "musical chinoiserie" in Ravel's Laideronnette than in most of the Asian pieces, and almost as much Impressionism in Jianer Zhu's Images of the South as in the French works. The composer worked on Yo-Yo Ma’s “Silk Road Project”, and accordingly has an aptitude for accessible, cross-cultural music. The suite treats five Chinese folk melodies to Impressionistic harmonies, in an introduction, two liltingly melodic movements, a playful toccata and a lively folk-dance finale. Xiangping Zou illustrates various myths of a multifaceted character from ancient Chinese literature, which allows a wide range of pianistic expression. A four-note motif is a constant feature; the work's tonality is more a matter of coloristic saturated harmony than functional development, and the piece abounds in descriptive drama. Xilin Wang was exiled to the Shanxi province during the Cultural Revolution, and his suite, the most pianistically ambitious and virtuosic of the new works here, consists of impressions of his painful experiences in exile; the movement titles include “Bleak Village”, “Memory” and “Graveyard”, and “Flower Song”, contradicting its title, is a furiously aggressive toccata. Thematically, the music is inflected by traditions of the region, but expressively the vocabulary has its origins further to the West, mid- to late-20th century musical indictments of Soviet oppression apparently a powerful model. Xie Sisters Piano Duo.