HK GRUBER (b.1943): Frankenstein!!, Perpetuum mobile/Charivari, Dancing in the Dark. 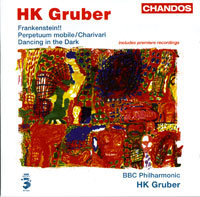 Description: Gruber has always been fond of subverting the traditions of German/Austrian Romanticism to his own ends, and Dancing in the Dark is a particularly fine example of his success in writing music that is simultaneously part of the tradition of Mahler and Strauss and the Second Viennese school and stating with devastating clarity that the world, and the world of music, have both become a disturbingly fragmented place in the past 100 years. Many gestures in the piece are in fact very Mahlerian, and the rich and varied orchestration of what is effectively a large-scale concerto for orchestra places Gruber in the company of his distinguished forebears. Charivari does the same sort of thing but in ostensibly lighter vein, extending a motif from Strauss' Perpetuum Mobile polka; Frankenstein is presented in a new, English-language version, with its blend of sinister and silly political/surrealistic imagery rendered more instantly accessible for English listeners. Texts included. BBC Philharmonic; HK Gruber (chansonnier).