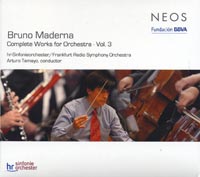 Description: A versatile conductor with an exhaustive knowledge of the orchestra and a high regard for the late romantic repertoire in particular, Maderna brought these traits to bear in his late orchestral works, such as those heard here. Ausstrahlung is a half-hour work of mythology and mystery, setting a variety of Persian texts in various translations, sung, spoken and via pre-recorded tape, with added entwining melodic lines from the composer's favorite solo instruments, flute and oboe. Maderna successfully crosses historical boundaries in this music, which incorporates a Romantic lyricism into a Darmstadt vocabulary, making of his material a fully worked out dramatic narrative, almost operatic in effect. The work is in sections, their order determined by the conductor, and a similar combination of aleatoric freedom and rigorous composition is to be found in the other works. The subtle, intricate orchestration of Biogramma constantly suggests Berg, and even Mahler, in lyrical luminous and sonorous textures. Grande Aulodia is a powerful, discursive drama in musical form, the two soloists acting as protagonists who begin with an extended soliloquy before embarking on a musical journey through a century's worth of musical modernism, from expressionism onward, before finally arriving at a poetic and surprisingly hopeful conclusion. Texts in original languages; no translations. Carole Sidney Louis (soprano), Thaddeus Watson (flute), Michael Sieg (oboe), Frankfurt Radio Symphony Orchesra; Arturo Tamayo. SACD hybrid.