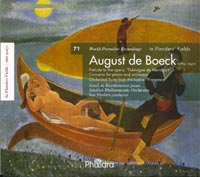 Description: World Premiere Recordings of what must be about the last non-vocal or operatic works by this Flemish composer. Of course, the 46-minute suite of music is from an opera, arranged in four movements corresponding to the opera's act-titles "Calling", "Passion", "Despair" and "Catharsis", the tale being of an apprentice painter in 17th century Holland who loses his heart to a fiery Spanish beauty who, of course, disdains him. The opera was composed between 1913 and 1920; the music is gloriously late Romantic. As is the concerto of 1926-29; you might call it late German Romanticism with the bright, sparkling spirit of Mendelssohn. A concise 23 minutes in length (the usual three movements), it was originally written for a "Hans Piano". A what? Dude by the name of Pierre Hans (1886-1960) was an amateur pianist with fingers too thick to comfortably play a normal piano, and he commissioned the Pleyel firm to build a two-manual concert grand with the upper half tuned a half tone higher than the lower, enabling such special effects as repeat complete chords at a very high speed. Several concertos were written for it by composers no longer known today (although I did know René Barbier's name) but the cost of the instrument and the uncertain political situation killed the instrument off. The pianist who performs here made a "normal piano" version in 1982 and played it twice in the mid 80s. Josef de Beenhouwer (piano), Janácek Philharmonic Orchstra; Ivo Venkov.