ARTHUR BENJAMIN (1893-1960): Suite from The Conquest of Everest, Storm Clouds Cantata from The Man Who Knew Too Much (Abigail Sara [mezzo], Rob Court [organ], Côr Caerdydd), Waltz and Hyde Park Galop from An Ideal Husband, LEIGHTON LUCAS (1903-1982): Portrait of the "Amethyst" from Yangtse Incident, Dedication from Portrait of Clare, Prelude and Dam Blast from The Dam Busters, Stage Fright Rhapsody for Piano and Orchestra from Stage Fright (Catherine Roe-Williams [piano]), Suite from Ice Cold in Alex, This is York, March-Prelude from Target for Tonight. 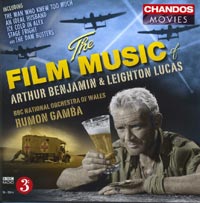 Description: The latest "Chandos Movies" release brings 24 minutes of music from three of the many films Benjamin scored with the highlight being the cantata from Hitchcock's first (1934) version of The Man Who Knew Too Much and which Bernard Herrmann kept for the later version, adding a few amendments which actually lengthened the piece (the latter version is recorded here). Most of Lucas' film scores were lost after his death; the 9:26 documentary This is York is the only complete one surviving as the rest of the music here was reconstructed from piano scores or from the film soundtracks. BBC National Orchestra of Wales; Rumon Gamba.