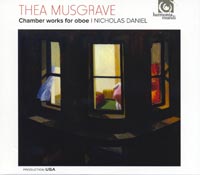 Description: Night Windows is based on a typically ambiguous, evocative and lonely painting by Edward Hopper, and consists of five emotionally charged movements portraying the imagination's response to the hints of solitude and despair glimpsed through the curtains. A 2007 work, the music is cast in the eloquently tonality-based language that has characterised Musgrave's more recent compositions. The Impromptus are more than three decades older, and contain some experiments in aleatory technique, lending them an improvisatory feel rather than any sense of avant garde eccentricity, while the trio, the earliest work here, is somewhat spiky and acerbic, less obviously tonal than the recent pieces, and an object-lesson in balancing an intrinsically unequal combination of instruments. The recent Cantilena is a lyrical work which explores the composer's long-standing preoccupation with vividly developed dramatic situations in instrumental music, with the oboe cautiously entering from offstage and attempting to join in the ongoing discussion within the string trio. The way in which the 'characters' in this little narrative and their evolving relationship are portrayed through thematic and harmonic development is truly ingenious. Niobe accompanies a melodious oboe lament with electronically transformed bell sounds; Threnody is a similarly expressive lament in more conventional instrumental terms. Take Two Oboes is a light-hearted set of contrasting character pieces exploring various technical challenges for the instrument. Nicholas Daniel (oboe, cor anglais), Joy Farrall (clarinet), Huw Watkins (piano), Members of the Chilingirian Quartet.