T. PATRICK CARRABRÉ (b.1958): Symphony No. 1 "The War of Angels", Symphony No. 3, The Dragon's Tail, Inuit Games for 2 Throat-Singers and Orchestra (Pauline Pemik, Inukshuk Aksalnik). 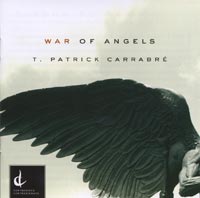 Description: Inuit Games integrates the guttural rhythmic chanting of Inuit throat-singers into a somewhat Sibelian or Rautavaara-like orchestral landscape. The evocative title and movement titles of the first symphony do not so much reflect programmatic content as suggest the general mood and atmosphere of the three more-or-less conventionally structured movements. The music is dramatic, alternate warlike and somber, with a constant sense of striving for epic imagery on a mythological scale. The piece would be a highly suitable accompaniment to the apocalyptic Biblical landscapes of the English painter John Martin. The Third shares the tonal vocabulary and three-movement structure of the first, and its sense of drama, though here greater emphasis is placed on driving, percussive rhythms in the outer movements, while the slow movement is more frankly lyrical, a gently muted pastoral elegy which twice briefly gives way to rugged climaxes before calm is restored. The Dragon's Tail depicts the mythical beast with bold Romantic-cinematic gestures (including the creature's snarling - the orchestra's 'Lion's Roar', strategically employed) and propulsive driving percussion. Winnipeg Symphony Orchestra; Andrey Boreyko (Inuit Games and Sym. No. 3), Bramwell Tovey.